Voice your bugs/glitches encounters or workarounds you find. While this forum is unofficial, we welcome Disney developers to stop by to help.
23 posts

Working good for me this morning, HD and PvP. Squad mates attacking ok in war too.
Player name Dog. Biting rebs across the galaxy.

I've been playing this stupid bugged game for 4 years now. I ate the devil's bread on Windows for almost 3 years, and when they shut down the game for Windows, I thought nothing could be worse than play on that platform... I see now i was wrong... Play the game now on iOS/Android is yes, WORST than play on Windows...

I don't know WTF Disney did with the iOS/Android SWC or from where in the hell they hired those idiots on the game development, but I'm done. I gave the game all chances, i was patience and generous, built several accounts, played with both factions, and could have fun at least. Now the fun is gone, the game is totally FUBAR and near to death.

I did my last Squad War tonight as rebel after get this: 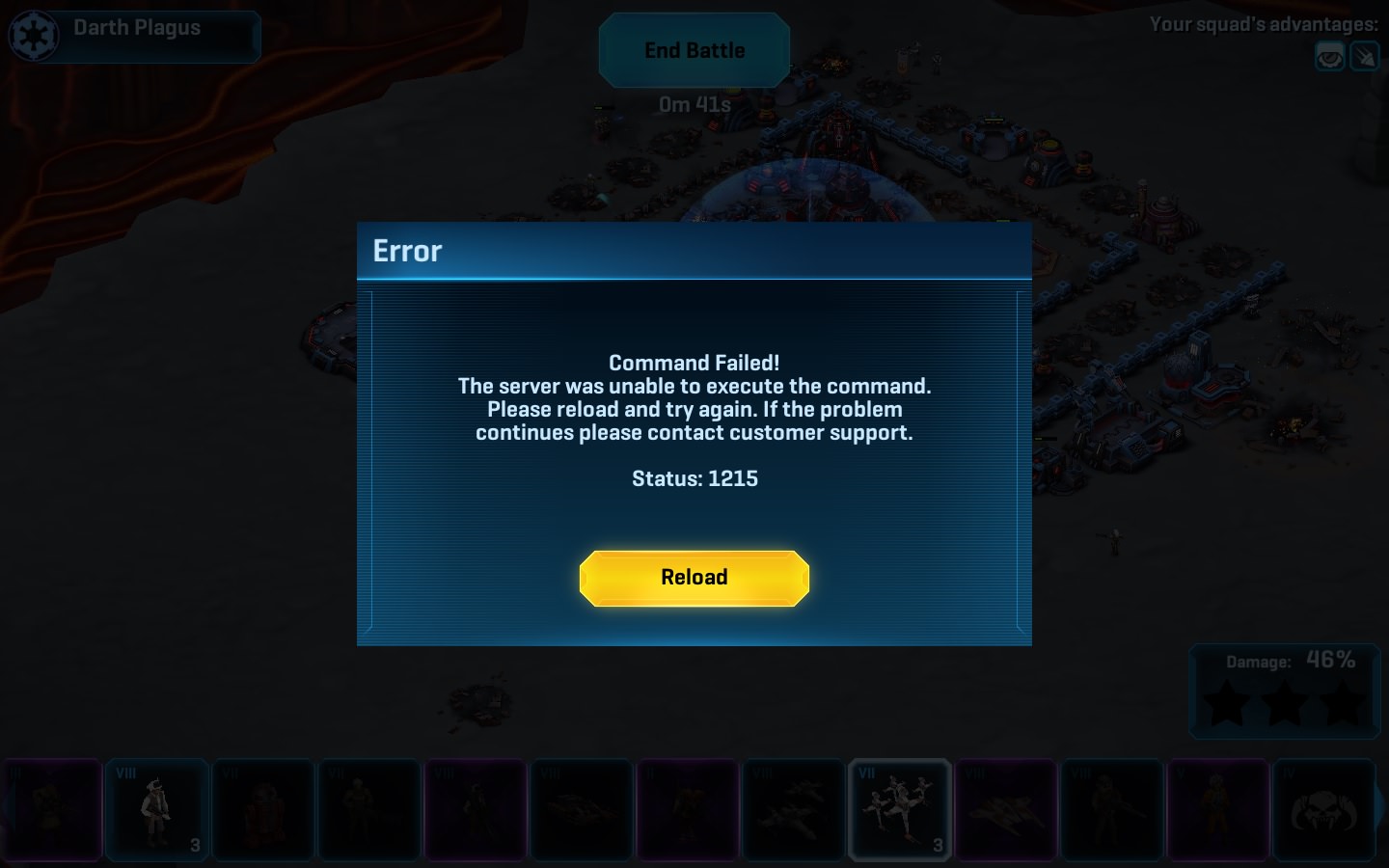 I still took 1 uplink while game was running in the background, and then kept the screen error locked while I'm talking to my squad mates in my other account on other device, and explaining... I checked War Room - the attack was not validated, and I still had that attack left. Then I waited almost 7 minutes, and then reloaded the game. As soon as I reloaded, the attack was validated with 0 uplinks. I lost the attack, lost the troops, and lost the crystals used to rush starships to attack again while we had Yavin.

I don't care about getting error in PvP attacks. PvP is dead. But this was a War attack!

I'm tired of all these bugs and problems. I've been playing for 4 years, is time to take slow and don't give a shit anymore for a poor developed and totally bugged game... Disney can stick all new units in Mickey's ass from now on, and launch stupid Events every week, I don't care. I will finish the upgrades I still have to finish, and burn the rest of crystals from my Windows compensation. They can pull the plug if they want and everyone at Disney can go to hell.
SWC Windows survivor.

Error 1215 is an SC problem. Either your SC was overloaded (more than 40 UC), or you attacked with a partial SC (less than 40 UC) and someone donated to you during the attack. Not saying they shouldn't fix it, but it is preventable.
Marauders-Delta

Just had a 905 error, but it was one of the rare ones at the end of an attack where I got to keep the win.

I got the error 905 again. Ruled 100% and should get many of the smuggler parts (the red for merchants). But i got only 905 and lost all troops for nothing.

someone pass up the cheese this whine needs something with it

Yeah, the same old end of attack 905 errors kept popping up now, and it also showed up when moving between planets.

At least the 905 error at the end of the attack didn't change the result. It was still recorded. Just annoying.

Come on devs. Regression, again ? really ? this is getting ridiculous.

Yes, great job, Devs! They are getting even better in giving the Status 905 Error...

At least, no loss by 100%, and EP earned... Remember when we used to lose everything? But still annoying and unbelievable...
SWC Windows survivor.

This is really ridiculous! When relocate to another planet "command failed 905" ,at the end of attack "905 please reload" ,wth ,seem like with every update for one improvement we get 2 or 3 things that won't work anymore,where do they find these guys !!! at kindergarten?

I think I must be really a jerk for keep playing this misery game and full of bugs... Along with Status 6053 and Status 905, now game is freezing at the end of my attacks... Then I wait, and wait, and nothing... Reload and... I lost everything!

Great job, you idiots at Disney Interactive. If you wanted another player not playing your stupid game anymore, you just got. No more Wars, Conflicts, Events, Objectives or anything else they invent to try to keep this game alive for me...

This game is ruined and near to death. Last player to leave the starship please turn the lights off.
SWC Windows survivor.

Return to “Bugs and Glitches (Windows)”